Discover the person behind the CV 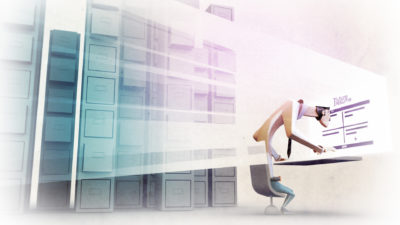 Frustrated by the limitations of traditional CVs and concerned about the spiralling number of disengaged employees, former recruitment software MD Tim Richards and business psychologist David Royston-Lee have today  (October 30), launched digital start-up Future Resume providing a revolutionary recruitment tool that allows companies to ‘discover’ the person behind their CV.

Designed to replace the need for a first interview, a Future Resume acts as a sophisticated, digital matching tool and provides hiring managers with improved insight about the candidate. This means that they make a more informed decision about who to shortlist and interview, saving a significant amount of time.

The carefully-designed questions in a Future Resume identify potential aspirations, talents and values that show who the candidate is and what they are capable of doing, compared to a CV which simply focuses on past experience and achievements.

Richards and Royston-Lee say a better job match also contributes to higher levels of job satisfaction and employee happiness, which can lead to increased productivity and lower staff turnover.

The idea took shape after Richards, former MD of leading recruitment software producer Bond International Software, was considering his next career move following the sale of the company.

“Having been in the recruitment software industry for 25 years, the calls I was getting from recruitment consultants focused on my past experience and not what I wanted to do in the future,” Richards said. “I was convinced the industry was missing something important because they were looking at me, a potential new employee, in just one dimension – my past.

“The current recruitment process is flawed and this results in thousands of people being stuck in the wrong job, being unhappy, unproductive and ultimately having a detrimental effect on both a person’s happiness and the economy. Future Resume can help to change all that.”

Richards found a ‘meeting of minds’ with Royston-Lee, who had been working on this issue for some time. Together they created Future Resume, a tool which takes candidates through a series of questions.

Royston-Lee said: “What we all really want is to find a job that inspires us, one we feel passionate about, where we want to stay, grow and develop. My whole life has been about helping people to find the right job and when I met Tim we realised we were working towards the same goal. Together we want to make it easier for people to recruit the right individuals and for people to be better matched to a job and company culture.”

The implications of a disengaged workforce are clear. According to a recent summary of Gallup’s State of the Global Workplace Report , 85 percent of employees in 155 countries are not engaged (or disengaged) at work, with a reported economic cost of around $7 trillion in lost productivity. Overall, just 10 percent of employed residents in Western Europe are engaged — involved in and enthusiastic about their work.

And research from management consultancy Hay Group (now Korn Ferry) revealed that unmotivated staff in the UK were cutting British productivity by almost half. In its what’s My Motivation? report, employees believed that they would be as much as 45 per cent more productive if they were doing a job they loved. This increase in productivity could be worth up to £340bn added output per year to the UK service sector alone. Just 15 per cent of UK workers polled considered themselves ‘highly motivated’, with as many as a quarter (24 per cent) admitting to ‘coasting’ and a further tenth (8 per cent) being ‘completely demotivated’.

Richards and Royston-Lee say the use of Future Resume will also help to address recruitment struggles faced by young people with little or no past work experience and employees recruiting for entry-level jobs. In a McKinsey survey of young people and employers in nine countries, 40 per cent of employers said lack of skills was the main reason for entry-level job vacancies.

Using Richards’ and Royston-Lees’ approach means recruiters are able to move away from the current keyword search of CVs. The hiring manager logs into their Future Resume account and creates a new job position. They then invite potential candidates to complete their own Future Resume and both applicant and hiring manager receive a copy.

Independent job seekers can also buy and complete a Future Resume for £49.99 (excl. VAT), to be used in conjunction with a CV.

Richards said: “We wanted to give job seekers the opportunity to complete their own Future Resume, so they stand out from the crowd when applying for jobs. It also helps them to discover more about themselves, so they can ensure any roles they are considered for are a good match.”

The questions, which take candidates around 45 minutes to answer, make the recruitment process faster and more efficient because the recruiter better understands the applicant. The pair say a more effective match of candidate to a job role also means workers will be happier, more engaged and therefore more productive.

Before officially launching on October 30, Future Resume was trialled by more than 100 inner-London students and several businesses.

“Feedback so far has been extremely positive”, said Royston-Lee, “We’re very excited to see the contribution Future Resume will make, benefiting both the job market, the recruitment industry and the economy.”

To find out more watch the video and visit the website at www.futureresume.com

Media contact: For more information or to arrange interviews with Tim Richards or David Royston-Lee please contact Cathy Kelly on 07704 130226 or email cathy@catherinekellypr.co.uk